The main activities of our society revolve around the passenger-hauling railways. We have both raised and ground level tracks. In addition, we also operate a garden railway.

The raised track is in the form of a continuous kidney shaped loop which combine 3½” and 5” gauge line of 207 metres (680feet) in length. Minimum radius of curvature is 10.5 metres (35 feet). Ruling gradient is 1 in 100. It is suitable for 3 1/2″ and 5″ engines, which usually run anti-clockwise with access via a turntable from the steaming bays .

The ground level track is dual 5″ and 7¼” gauges. Rails are steel, with wooden sleepers, and are laid on a concrete base.

The main circuit is approximately 680 feet in length and has a ruling gradient of 1 in 100. Curves on the main line have a minimum radius of 46ft, and superelevation to correspond with a speed of 6mph.

Entries to and exits from curves have a transition length of 20ft. The station platform is located on a passing loop. Beyond the station, it is possible to either re-join the main line, or go into a headshunt. The steaming bay access goes directly on to the main line via a trap point. Access to the carriage shed is from the headshunt.

Trains travel round the track in a clockwise direction. Train movements are controlled from a signal box, which is located at the departure end of the platform.

The points giving access to the steaming bays and carriage shed are operated locally by foot pedals. All other points are electro pneumatic. 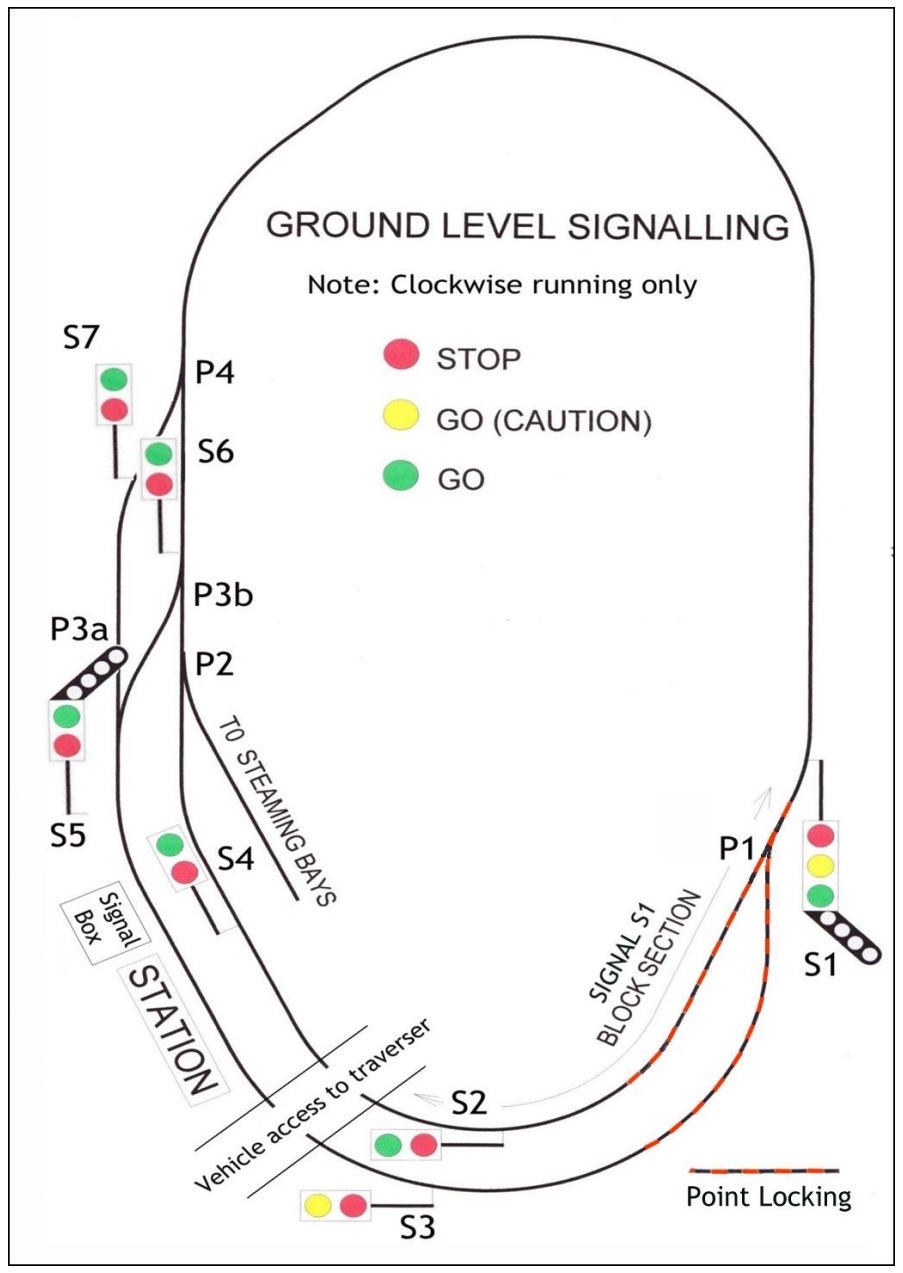 All drivers must stop at red signals. A green signal should be regarded as an indication of position of the following points. It is not a confirmation that the track is clear as far as the next signal. Drivers are always required to keep a look out for other trains and maintain a safe stopping distance from any preceding train.

When members of the public are being carried, specific operating rules apply, and these must be followed during all times of public access.

The society owns two 5” electric locomotives one of which has been built and run by our our group of junior enginers.

Visiting drivers are welcome but should note that for all boilers having a capacity above 3 bar-litres, a valid boiler and annual steam test certificate will be required to be shown. If passenger hauling, it is a requirement of the Society that spark arrestors or deflectors are fitted.

Elevated (3ft high) double-track layout for 16mm Scale Narrow Gauge locomotives and rolling stock. For Steam- or Battery-operated locomotives only – there is no track power.

Peco SM32 32mm gauge track and point-work is laid on an open-frame timber-slatted deck. The track is level throughout. Minimum radius of inner main line is 3ft 6in. There are crossovers between inner and outer tracks in both directions with 5ft radius points. All points are manually operated.

There are four steaming bays – two inside, two outside – but siding space for shunting operations or stabling rolling stock is limited.

Dimensions approximately 11ft x 30ft (outer main line). A lift-out section gives easy access to the inside, though it is possible for the reasonably fit to “duck under” the deck when this is in place.

Visitors are welcome to bring their own steam locomotives, but they MUST have current steam and hydraulic boiler test certificates and a gas tank test certificate conforming to SFMES regulations (Southern Federation of Model Engineering Societies).

CORONAVIRUS: In response to the latest measures – sadly our regular PUBLIC RUNNING days remain suspended. Members are also reminded that the Club House also has restricted access until further notice.